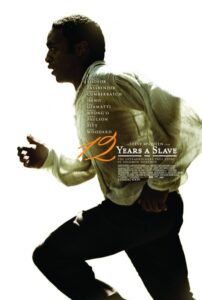 It will seem a small thing, but the transitional rhythms of this film lingered in my memory. One in particular: the sermon of a slave owner (Benedict Cumberpatch) interwoven visually and aurally with the abuses of his farm manager (Paul Dano) and the percussion of seed sowing. It’s a passage that’s indicative of the film. The vision is not without its adornments. For all the praise of realism (and the long, unfolding wide shots certainly bring that neutral observer feel during some key abuses), I couldn’t help but feel the extent to which McQueen and his team nudged the material towards dark fairy tale, or even horror story. You could be taken in the night, have your identity stolen and toil ceaselessly as a slave without hope of escape. That cacophonously percussive steamboat is a passageway to another world. (The frequency with which reviews emphasized its metaphorical import is telling.) The long shot on Solomon’s face as he leaves the plantation is a nice stylistic answer to that earlier scene.

(What’s also interesting is how forward the filmmakers were about the structural shift in the editing process from linear-chronological to a loose flashback/storyteller structure.)