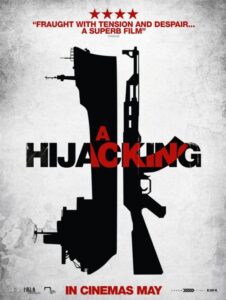 Much as I appreciate Captain Phillips, this film succeeds by being everything Phillips was not. If the Greengrass film is about the timeframe of crisis that mobilises all players, this is about the slower war of attrition that is likely involved when the United States doesn’t take an active interest. There is no Pax Americana to force a climax. Corporate executives, consultants and a translator (employed by pirates) trade gesture and counter-gesture without direct communication. There is no pulse-racing ship-seizing setpiece. The inciting incident of piracy happens offscreen. The effortless crosscutting that instantly communicates scene geography and stakes in Greengrass’s film is gone. Instead, we’re often stuck on one side of a phone call, deprived of a clear sense of the circumstances of what is happening in the other story branch. Violence is rare, and comes without tense foreplay or catharsis. But the realist feel Lindholm cultivates is much stricter than Greengrass’s more classical approach, so when the violence does come, its implications are more keenly felt.