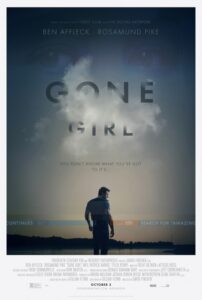 Whoever said ‘a couple is a conspiracy in search of a crime’ might have been thinking about a story like this. Many films blend genres together effectively. Few pass the ball entirely from one form to another, and seeing it done well is reason enough to see this. Here the genre baton is passed from the most poe-faced of forms, thriller/crime, to the least sincere, social satire, both well suited to the feeling of emotional detachment Fincher’s films often convey. Many staples of satire appear in memorable forms – the preacher whose teachings leave us outraged (Anna Ratajkowski); the innocent who exits the stage screaming at the insanity of the system on our behalf (Carrie Coon); the sardonic trickster who knows better than to expect sane results (Terry Perry).

Perhaps the characterisation most native to satire is that of Amy (Rosamund Pike). We can lament that the film tilts sympathetically towards Nick Dunne (Ben Affleck) – Amy’s psychotic status nullifying most of her criticisms of him – or we can relish the film’s awe of this impressive antagonist. When she wanders up that garden path, drenched in blood, and her husband insists on a naked shower with her for his own safety, I could only smile, and it took a while before I stopped. You have more to fear than the safety of your bunnies with this partner in crime.

I’m not sure the film tears marriage apart. Rather it seems to be saying that even under absurd circumstances, it’s necessary for survival. That theme is written all over that ending, but perhaps the strongest hint is in that mid-film encounter Amy has with trailer park America. It takes two to take on the world, and when she gets that math wrong, even this superwoman is vulnerable.