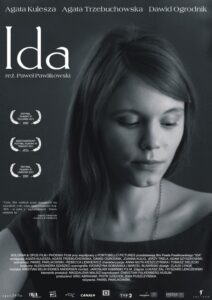 Few films in the last year require as much active leaning forward on the viewer’s part. And the more knowledge you can bring to fill in the many ellipses of the story, the better. Some basics on the shifting positions of Jews, the Church and socialism in twentieth century Poland won’t go astray. A bit of background in the films of Bresson and Dreyer wouldn’t hurt either – this film will stoke the untended fires of their fans in much the way Sorrentino’s The Great Beauty could be called sustenance for malnourished Fellini fans. (Which is not to speak ill of either film.) By the time art film’s favourite Bach selection – BVW 177 – is needle-dropped, as ever a superb formal signal that a film is coming to a close, cinephiles of the right generation should be amply wooed. With time, everything becomes fashionable again.

The aesthetic journey is unique amongst recent films. Stoic use of the Academy ratio with ample ceiling room is a reminder of how rarely filmmakers reach outside received wisdom of classical visual language. (We might argue about what that open-top framing is about, but its ubiquity makes it an essential, and beautiful, part of the package.) The central performances of Agata Trzebuchowska (Ida) and Agata Kulesza (Wanda) place two different acting approaches alongside eachother, and the effects can be felt in how we attach to the characters. Ida is the Bressonian model par excellence, a Kuleshov face hungry for an image either side of it, and even then we wonder what’s on that mind. Wanda is more complete in her detailing and sense of inner life. It’s no coincidence that viewers tend to consider this character, not Ida, as the film’s richest. The discrepancy of depth in the two is well suited to where this film wants to take both. (Perhaps there’s something about the mentor-antagonist figure in coming-of-age stories in that.)

If there is such a thing as visual storytelling, it’s probably at its purest here. The sequences where Ida tries on her aunt’s shoes, or her mid-film return to the convent, are exemplars of this. The soundtrack is minimalist to say the least (and I don’t just mean the absence of music). Dialogue is scant, and increasingly as the film progressed we’re asked to deduce what must have happened, rather than witness it happen. This extends to what might be considered the most important aspect of any narrative film – the evidence of whether the world or characters have changed as events come to a close. There’ve been some strong coming-of-age / personal growth narratives in European art film these last two years – Beyond the Hills and Blue is the Warmest Color among them – but of those I’ve seen, Ida’s growth is the most inscrutable. Has she been changed by what has happened around her, or not? If you believe that the best surrogate is a palimpsest, Ida is the girl for you.