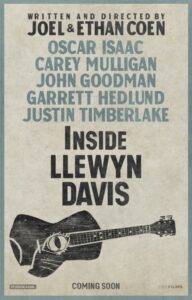 A film wrapped around a ghost, represented by the song ‘Fare thee Well’. The shift in character of that song from first to final appearance tells you most of what you need to know, but which the Coens are expecting you to find for yourself. As with A Serious Man, interesting things are happening with structure here. (Another nice twist on showing the same scene twice from different points of view.) The time loop adds a sense closure to an episodic narrative, a sense of inevitability to Llewyn’s final state, and generate empathy with one of recent cinema’s pricklier protagonists. Kudos for the ‘Kuleshov cat’ subway scene.