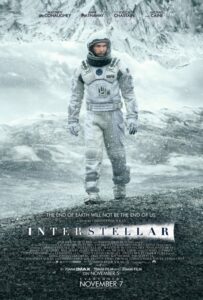 We can probably thank this film for endeavouring to ensure that a few more minds out there can relate to relativity theory. Dylan Thomas’ estate probably appreciates the attention too. There’s a coming cohort of quantum physicists inspired by this film that’ll have at least one line of poetry to muse on as they spend millennia transcribing the quantum data of their broken watches.

There are some interesting things going on in this film. I can’t recall seeing a film of its sort intercutting scenes of unrelated energies and events before, and I’d be interested to see if that pattern of scene alternation (which really starts with Jessica Chastain’s first appearance) is there in the screenplay or is, as it feels, an experiment that began in the editing room to balance narrative momentum.

The grain of the imagery, particularly in the spaceship, also has a unique feel to it (quite unlike Gravity or Prometheus) – could that be the elusive look of film?

The emphasis Nolan gives to music in his filmmaking is also heartening to see in an era where that tool is often employed timidly or haphazardly. The second striking work of Hans Zimmer’s team this year (after Spider-man 2) is a potent brew of glistening electronics, Straussian violin melodies, organ arpeggios and col legno strings. The fresh ingredients distinguish the work from the Zimmer tricks that make so many films indistinguishable. If not his most interesting musical smorgasbord since The Thin Red Line, it’s at least his strongest since Inception. For the album alone, I’m grateful for the film.

The music’s relationship to the imagery is as striking as its character. Few scores play through action as relentlessly as they do here. At moments, the serene parallelism of 2001’s indifferent music is within reach. (How striking the moment when a tiny ship floats through space to piano chords made equally small by reverb.) At other times it’s the more heated melodrama of Pino Donaggio in a Brian DePalma setpiece – more the driver of story than the accompaniment, and not all of these avoid haphazardness. (McConaughey’s departure sequence, or the build-up to Matt Damon’s betrayal, are about as close to running the show that a film score can get short of turning off the pictures altogether.) I’m not sure I can quite trumpet the choice to position some dialogue on the knife-edge of audibility. There’s more than one reason why nobody objects to that choice in 2001, and few of them apply here.

The strongest musical ideas for me are the simplest. The ticking of col legno strings renders the tense moments unique among recent spectacles. The build-up to the complete break of sound in ‘Imperfect Lock’ was the film’s most memorable moment for me, as is the swelling organ chord in the following sequence (‘No Time for Caution’). And the simple organ melody, first present in ‘Cornfield Chase’ and later central to ‘Stay’ and ‘Quantifiable Connection’, lend the film’s closing scenes an emotional heft for me that would not have been there in their absence. Ironically these are the most conventional moments of scoring within the film.

It is gratifying as well to see an attempt to weave a scientific idea (or even the smattering of one) through a story, something that seems – going on recent results – to be among the hardest dramatic feats in Western filmmaking. And I’m not talking about the film’s solution to the theory of everything, rather the setpieces and plot developments that communicate ideas about space-time relativity and higher order dimensions. It visualises black holes, neutron stars, wormholes, singularities and tesseracts. I wish the film offered more than a smattering of thought, that the film’s form didn’t continually work against its themes, that ideas were shown at least as often as they were told, and above all, that the drama was as emotional for me as it seemed to be to the frequently-teary characters. But I did appreciate that the film set-up an explanation for Rust Cohl’s cosmic epiphany in the finale of True Detective. It’s a rare film that not only explains not only all of its own mysteries, but those of others too.