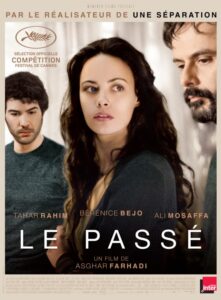 There’s an older post on this blog (lamentably incomplete) on how effectively Farhadi’s script utilises the framework and beats of the detective genre. (Quite likely without any intention of doing so, in much the same way his A Separation ups-the-ante on the courtroom battle stories.) This was pitch perfect filmmaking on every level. If we went into every thing it did right, we’d be here all day. Some things to watch for: deep focus compositions that allow the cast to breathe; realism without shakey-cam; an opening that beautifully flags the issues ahead without the symbols showing too clearly; a discrete colour arc; the metaphorical setting (a house mid-paintjob); great performances at all ages. The most graceful touch of all: a style shift to formalism worthy of Bresson as we finally meet the ghost whose unhappy wake we’ve witnessed.

Farhadi already showed in A Separation that he doesn’t need bad guys to generate dramatic conflict, and that instinct shows in his crafting of the characters. The film consistently turns left when other films would turn right. (Take the unease we naturally feel when Ahmad – Ali Mosaffa – is left in the care of children not his own, and how it’s subverted by what a natural Ahmad is with the kids.) Perhaps the ablest hattrick is the passing of the ball between protagonists over the course of the film. Ahmad (Ali Mosaffa) is the right perspective to bring us into this world, and when others take over the torch to lead us to the self-revelation, most viewers will never notice that it’s happened.