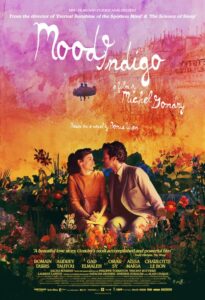 I’m told I’ve seen the shorter version of this film. Even then, it’s a film that will try your patience by the end, but that’s by no means a reason not to see it. There’s a madcap, uncontainable visual energy to Gondry. True, it rarely sees you through a whole film, but if it means 40 minutes of excellence before diminishing returns set in, there’s no shortage of nice trinkets to meditate on. The whirlwind romance section is giddy and inspiring, even if the slide to despair is too linear and emphatic to work. Almost every scene is alive with visual trickery that suggests another path cinema might have taken if we hadn’t gotten so hung up on making special effects integrate naturalistically with other narrative elements. The cocktail of Etienne Charry’s score and Duke Ellington selections helps with both the giddy magic (the former) and the sense that beneath the hullaballoo, something real is in contention (the latter).

Under the Skin (Jonathan Glazer) – Did I say Ida was the most inscrutable character of 2014? Allow me to politely withdraw that statement. (Just kidding, I think Scarlet Johansson’s arc is more apparent here. 😉 ) Despite all the talk of this film’s opacity, it seemed to me if you just looked at what was happening, it was fairly apparent. Because we’re held at an emotional remove for some time from the main character, the film relies on negative capability more than most. I found its twist on fairy tale motifs thought provoking, and the fate of the main character enough of a payoff to the journey.

The fusion of filmmaking styles – observational, almost candid camera sequences alternating with the most abstract of effects-augmented imagery – is fascinating. Nobody makes movies this way, and that can’t help but affect the way it comes across. While master craftsmen shoot HBO coverage in IMAX, this filmmaker is searching for a new way to look at a story. Highlights include the opening sequence (sort of a modern of Persona) and the layering of observational footage over itself mid-film to form Johansson’s spectral likeness.

Mica Levi’s compositions come from another place to most film scores. They’re not an instrument of empathy, or not at first anyway. They rumble away orthogonally to the film, as strident as Johnny Greenwood’s There Will Be Blood, but even more resistant to familiar forms and emotions. We’re well past the halfway mark by the time the music lets us in, and it’s not until Scarlet herself has begun to thaw. The fusion of the composition ‘Love’ with its accompanying sequence works largely because of the distance we’ve been held at for so long, feeling cathartic in comparison.

I like to think of the film as a fairy tale told from the point of view of a character that would normally be the ‘nameless other’ that we fear. It’s telling that it takes a ‘monster’ amongst humans to draw her out of her predatory pattern. And once capable of empathy, she weakens. The pitiable image of seeing her suffering a medieval fate – practically tarred and burned at the stake, like so many women before her – ultimately moved me.