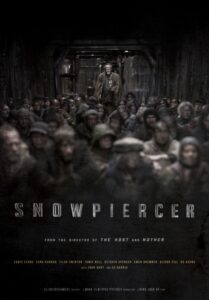 Truly if there’s an ‘uncanny valley’ in 2014 cinema, it has to be this fusion of graphic novel aesthetics, Marxist politics, environmental dystopia and setpiece-driven suicide mission. I understand the disconnect more sensible minds experienced when they encountered this, but after a week juggling fever and wine tastings (in Adelaide of all places), the sweet notes outweighed the jarring chords. Cockroach protein bars; sniffable narcotic fuel crystals; the ‘cutting of the fish’ as prelude to slaughter; the circumnavigation salute; the danse macabre violin waltz as eggs are circulated to one and all and bullets re-enter the narrative; the impossible glance and firefight between the cars of a train arcing around a corner; Marco Beltrami’s carrying of the Jerry Goldsmith flame. A memorable ensemble too: great to see Song Kang-Ho (the beating heart of Bong’s The Host) used so well.

All of these are decorative, and perhaps secondary to the broader dramatic arc we go on with Chris Evans’ protagonist. The film takes advantage of the assumptions we place on heroes like this, and this blond-haired blue-eyed revolutionary has a monologue at the three quarter mark that bloods the stereotype memorably. Revolution is not uncomplicated in this world (even if the same can’t be said for what it’s attacking). Another highlight is the ‘sound of the engine’ beat – I don’t know if the moment quite worked (the metaphor is not so much mixed as naked), but I have to admire a film that puts that idea at its climax. Such a film is more than a dumb action movie.