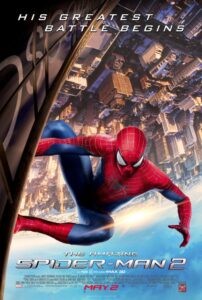 The Rise of Electro (Marc Webb) – Many criticised this film as lacking a coherent narrative centre for its charming romance to orbit. I saw a charming romantic centre around which a few marginally-coherent villains orbited. To me this was a nice change from the villain-antagonist emphasis of the superhero form, and a sensible response to the perceived strengths of its predecessor (romance strong; villain arc weak), even if it was the unintentional outcome of a haphazard process. Not that the villains are a complete waste of time. The visualisation of Electro is truly beautiful, and his first clash with Spiderman in Times Square a reminder that there is very little that can’t be rendered in today’s visuals. The film is also blessed with a rare traditional superhero score by Hans Zimmer’s team, including a Vangelis-style theme for Spiderman and a bold (if not quite revolutionary – don’t tell Hans) use of vocals for Jamie Foxx’s Electro. Between this and Interstellar, Zimmer’s had a striking presence in film this year.

The film also contains one of my favourite associative edits of late – Lucy’s animals notwithstanding. The climactic struggle is situated amongst an abstract cathedral of clocks, which collapse dramatically in slow motion around the action. As a beloved character falls to their death, the stop of their falling body is echoed with the collapse of a giant clock’s minute hand. Subtle it’s not. Visual storytelling it is.