The Edge of Tomorrow (Doug Liman) 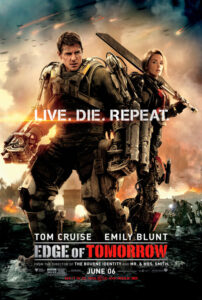 A coward dies a thousand deaths. While this original sci-fi property has an interesting collection of symbols (World War II feels like the last significant war that happened), it offers something few of Cruise’s starring vehicles have offered: using that stunning smile as the shield of a coward. Somehow Cruise as snaky coward is more believable than Cruise the Innocent (his last sci-fi dabble, Oblivion), Cruise the Deadbeat (War of the Worlds) or Cruise the Griefstricken (Minority Report).

Perhaps the only shame here is that more isn’t made of the personality clash that should exist between a marketer in soldier’s clothing and Emily Blunt’s Joan of Arc figure, particularly the comic possibilities. The thousand deaths are inventively mapped, but was he a coward for enough of them? By the time he makes a good woman of Joan of Arc, the terrain has regularised into something a bit blander than what it could have been. (But I forget myself. This isn’t entirely nice.)

A lot of what works and doesn’t work here is useful for anyone writing a replay structure to study (e.g. Run Lola Run) – something that will become more importance as more films emerge from video games and those that play them. It’s less repetitive than you’d think, given the premise, and in part that’s a function of the amount of story ground it needs to cover. The film also has a ton of exposition to convey about its world, and the opening faux news montage does an impressive amount of heavylifting. (Although a later verbal exposition dump flew a little more over my head.) And there’s got to be something said about getting the most out of your shots. Has any film this year more frequently referred to one of its images than the way this film returns to Emily Blunt, transitioning in slow motion out of a plank position into a cobra stretch?