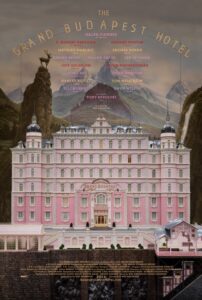 If you find Andersonland amenable rather than irritating, you’re never short on gestures to relish. Gustave and Zero, both the characters and the characterisations (Ralph Fiennes, Tony Revolori and F Murray Abraham). Boy with Apple. The concerto for footsteps that ends in four severed fingers. The Society of the Crossed Keys – for which Desplat must be partly credited. Lessons in comic framing in three aspect ratios, reminding us that frame shape is more of a choice than most filmmakers make it. Lessons in instantly communicating storyframe through style choices. The conclusion’s deft closure of three of the film’s storytelling frames in half a minute is a feat of punctuation. The film’s dramatic side is just as strong. Gustave’s rage and subsequent shame after the prison break. More impressive: the elegiac endnote the filmmakers find their way to after so much tomfoolery. In this picture-book alternative Mitteleuropa, the heavy-hearted history of Europe is barely seen, but not unfelt.