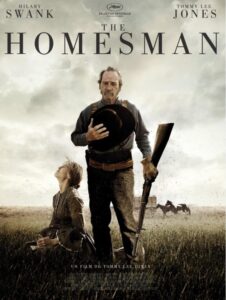 SPOILERS (worse than usual) – I don’t know that I really appreciated what Alfred Hitchcock pulled off in Psycho, ripping out the protagonist without killing the film, until I saw this adaptation of Glendon Swarthout’s novel. True, this is a double journey (between Hilary Swank and Tommy Lee Jones), so the loss of a key character is mitigated somewhat, but it’s the more important character that we lose, and I had no hint that it was coming. The way the film carries on despite that loss perhaps is not so surprising – from early on some truly disturbing images are laid out in so casual a manner that we see these moments for what they are, rather than the melodramatic value they’d normally bring to a story. The time jumps are handled similarly, the kinks are somehow abrupt, yet not – perhaps influenced by Jones’ collaboration with Guillermo Arriaga (Three Burials).

There are deep ironies in this material. That the same behaviours exhibited by women and men will be seen as madness in the former and strength in the latter. That figures of strength might fall to depression more readily than more obviously fragile cases. And as far as prize-worthy final images go, this film has a beauty. A drunken man tries to lose himself in revels and gunplay as he drifts across a river into darkness. It caps off a strangely ambiguous final scene that seems to be saying that the redemptions so many films offer us are not possible here. (What makes it an ambiguous scene is that we don’t have a character revelation to experience this through. Normally films use empathy with a character’s learning as a way to tell us what they’re trying to say. Our point of view is separate to anyone else’s in the scene. Truly perhaps this is what is meant by ‘letting the audience discover something for themselves’, although the risk is that discovery is less assured.)

Marco Beltrami does lovely work in a folk-hymnal idiom, connecting to the time and mourning the disappointment of its ideals.