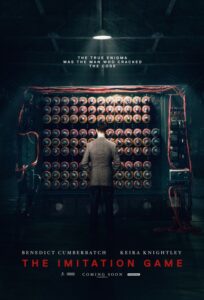 Like many biopics, this one utilises a detective structure (and even a detective) to find its way into the life of Alan Turing (Benedict Cumberpatch). He’s an enigma, but fear not, the film will decode him in time. The condensed arena in which that decoding is achieved is worth noting – we don’t even meet the parents that are normally a staple of this genre.

Two recurring features of this screenplay (as filmed) I appreciated. Despite the stakes, and the sense of tragedy they want to build by the end, scene after scene are advanced through comic beats. Turing, written and played as Asperghers, is a machine comic, always under-emoting or fixating to humourous effect.

The second feature is the layering of the film’s theme of coded communication through all the story branches and relationships. A code like Enigma could fall to Turing, but he forever struggles with the social codes those are around him are fluent in. The theme extends to include both the power and powerlessness that come with understanding a code.

A few more decorative observations. The time period switches aren’t signposted, yet always apprent. At times I wish they’d allowed some other aspects of the material (such as the all important birth of the computer, or one particular oft-repeated line of dialogue) to speak for themselves. (But I forget myself – that wasn’t entirely nice.) And Alexandre Desplat is incisive as ever, his delicately orchestrated reserved arpeggios and ostinati seemingly made for terrain like this.