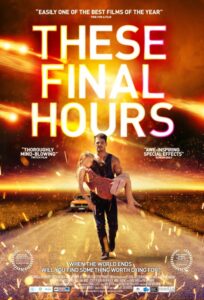 More millennial fever than sci-fi. It may not be intentional, but Lars von Trier’s Melancholia felt like it might have been an inspiration, particularly for the ending. (Although I guess there’s a broader tradition of things like The Road, On the Beach and Last Night.) The team have done well for their budget to give a sense of the end. The child actor, Angourie Rice, is well directed. The choice of dilemma and the hero it was handed to seem to have worked for audiences, going on IMDB comments. My thoughts were mostly with the other side of the story: Zoe’s (Jessica de Gouw). That character needs sufficient magnetic pull to bring the story back to her, so it’s no surprise her desire leaves a stronger impression than that of the film’s protagonist. Australian cinema’s commitment to the emotionally reticent male is strong, but I’m not sure his was the right desire line to follow this time.