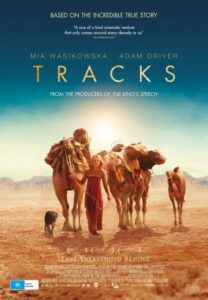 The filmmakers’ commitment to rendering ethereal the journey of Robyn Davidson (Mia Wasikowska) across some of Australia’s most punishing terrain cannot be doubted. (I’ve experienced Australia’s inner challenges only in the lightest possible sense, and it’s a truly transformative art that can make those conditions ethereal.) I was struck by the clear direction of the film’s soundtrack’s composition – both in the use of Garth Stevenson’s New Age compositions and the delicate sound design arranged around them. If the film consistently moves away from gritty immersion towards a different sense of time and place, it’s in that soundtrack.

You don’t watch this film for the drama, nor for stoicism. Its handsome aesthetic journey is almost reason enough to take the trek. The shift of colours from red to orange to brown to white and finally blue, as Davidson disappears into a frame of aqua, is carefully plotted and achieved. Our surrogates are amenable enough that human interest isn’t forsaken either.

There is a scene that has always made it into a class of mine. The opening montage distils the essentials of the narrative, planting the idea that Davidson’s famous journey began with a pivotal parting in her childhood. We tilt up from a passing child’s feet to see, far away, the shape of a growth woman running into a desert heat shimmer, her footsteps coagulating into the shunting of a train. And then, in one of the loveliest cuts of 2014, we find ourselves in the now, looking at the face of a dog, sitting on a train. And then we meet our protagonist, asleep on a train, still facing in the direction she was running. That’s what film can do.