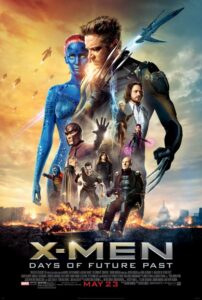 A great reworking of the graphic novel into blockbuster form, using Wolverine (Hugh Jackman) as the fish out of water. More than any of its series so far, this film tapdanced in showing off the mutant powers of its characters. One of these moments was a lovely theatre moment, as a crisis allows the powers of Quicksilver (Evan Peters) to come to the fore. The appreciative noises that ripple around a cinema when an audience knows what is about to happen (yet still manage to be surprised) are great to hear. The demonstration is so effective, the film had to shuffle the character offscreen shortly after, lest his gifts circumvent all other remaining crises. Most of the other set pieces are less soloistic, each written to take optimal advantage of the impressive ensemble cast. (The opening battle, the Pentagon heist and the Paris Peace conference all come to mind.) The ‘lowest point’ moment, when Young Charles (James McEvoy) finds consolation in his future self (Patrick Stewart), is surprisingly moving, as is the outcome of Wolverine’s quest.