Dawn of the Planet of the Apes (Matt Reeves) 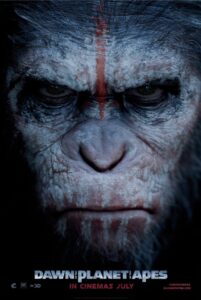 Rise of the Planet of the Apes followed in the spirit of Mary Shelley’s Frankenstein, ruminating on the dangers of playing God in biochemistry, projecting them into a franchise that has always proved a good carrier for insecurities. Dawn jumps the story ahead, and despite its sci-fi cloak, it’s the nearest thing you’ll see to a western these days. (Genres tend not to die, but when they do, they forward their concerns to others.) It’s a settlers-in-the-wilderness western, with a weakened ragtag of humanity in place of the usual colonists/settlers, and the flourishing ape culture in place of the indigenous other. There’s a nice inversion in that the colonists are striking out from the West Coast rather than the East Coast, and they’re perilously weak.

War hasn’t begun yet, but it seems inevitable. Competing influences within each culture are convinced of the necessity of war or peace between men and apes. The story aspires to the tragic revelation even the best doves will struggle to achieve a first-best world while hawks abide. Both hawks and doves are more simplistic than they need to be here, but nonetheless I was moved by the relationship between Jason Clarke’s character and Andy Serkis’s Caesar. (There’s a beat of eye contact between the two towards the end of the film that is a testament to the naturalism of modern special effects.)

There’s a lot that works about this reinvigorated series, and the aesthetics have moved even further in the right direction. The taste of Cloverfield that comes mid-battle as a tank is torn apart is a good example of the right camera angle raising the stakes.