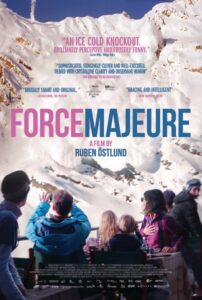 While few would describe the film as a comedy, the chuckles of embarrassment that circulated my cinema spoke to the way people identified with Tomas’s reduced stature as cowardly father. The rift that forms between Tomas (Johannes Kuhnke) and his wife Ebba (Lisa Loven Kongsli) and children over a failure of valour lowers the man to a moment of emotional honesty so embarrassing one can only laugh. The satire is broader than the role of the father – few figures escape unscathed, and it’s not exactly gentle ribbing at that.

The film is immaculate in its direction. Ostlund crafts some truly uncomfortable frames for his characters to squirm in. He applies a clear visual strategy that speaks to the story – from their first grinning moments in posed family portraits, the family is pushed apart to separate focal planes and separate frames. (Only Tomas’ meltdown brings them together again.) Much like the daily cycle suffered by Roy Scheider in All that Jazz, the repeated instrusions of avalanche guns and snatches of Vivaldi each new day brings add a dash of malicious humour. And I love the landing where Tomas and Ebba argue in their pyjamas, in plain sight of hotel cleaners – effective use of place. What possibly elevates the film as a dissection of marriage over Gone Girl is the added pressure brought by the presence of children, the absence of pulpy signifiers, and most important of all, Ebba is a human being, rather than a psychopath.